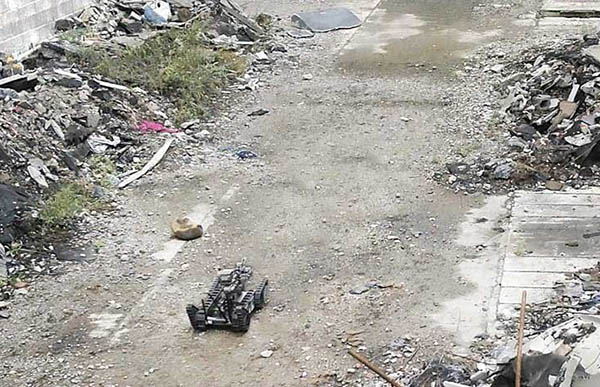 Last week's collapse of part of the Champlain Towers South condominiums in Surfside, Fla., was a reminder of how structures can fail and suddenly affect human lives. More than 150 people are missing. As with other disasters, from wars to hurricanes, robots and drones can play a role in finding trapped or lost people, assessing the damage, and ultimately rebuilding and predicting future incidents.

“Why, after another multistory building collapse, are we we not any better off operationally than 20 years ago?” asked Robin Murphy, Raytheon professor of computer science and engineering at Texas A&M University. “We need to get tools in the hands of the people who should be using them, in the first wave of emergency responders.”

Murphy is an Institute of Electrical and Electronics Engineers (IEEE) and Association for Computing Machinery (ACM) fellow, and director of the Humanitarian Robotics and AI Laboratory. She has spoken about the role of robotics in responding to emergencies and infectious diseases, as well as the importance of human-machine interaction.

“While many drones are being used by firefighters and law enforcement, there's not a lot of economic incentive to develop the ground robots for emergency management,” Murphy told Robotics 24/7. “A drone can cost $1,000 to $3,000 and do everything it needs to, but the minimum entry point for such a robot is $100,000 to $150,000, and they are very specialized.”

“The public-safety market is really low-volume, low-profit, and high-risk, and there's no centralized purchasing agency,” she added. “There are no standards—just procurement constraints.”

“In the case of bomb-squad robots, the DoJ [U.S. Department of Justice] awarded certifications, listed robots, and set aside enough federal money for every squad around the country to buy one or wait for a better model within five years,” said Murphy. “Because of that, we saw a huge change in the market, with interest in user interfaces and smaller robots. It was the best of capitalism at work. We don't have that in emergency response.”

Could the Federal Emergency Management Agency (FEMA) do more? “Everbody thinks that FEMA is in charge after a disaster, but they're not,” Murphy replied. “All disasters are local, with requests flowing up to the region, then the state, and then FEMA. In the case of a terrorist bombing, the FBI is called in because of the Stafford Act, but FEMA is not telling anybody what to do.”

“Also, FEMA is not a science and technology organization,” she added. “It started out as an insurance and then as a response agency. It's interested in robotics at a certain state but not in getting it to the last mile.”

“Academicians may say they have developed a great actuator or pieces of software,” Murphy said. “After seven years, they may say a robot is perfect for search and rescue, but it would fail in real-world conditions. As engineers, the first rule in design is to understand the problem.”

“There are some who get this,” she recalled. “Howie Choset at Carnegie Mellon University and Rich Voyles at Purdue University will be the first to admit that robots can't do certain things. But when coring through concrete walls or floors after a building collapse, each of them grabbed that dimension. They've developed things that can be done with a robotic elephant trunk or a tethered container that can shoot out arms to move. Both took away different morphologies from studying constraints around what we're trying to do.”

Many tests of emergency response robots fail to replicate the unstructured environments they would face in the real world, Murphy told IEEE Spectrum.

“Things like the DARPA Robotics Challenge or the DARPA Subterranean Challenge are great, but they're not asking the right questions for search and rescue,” she asserted. “A parking garage or the Fukushima Daiichi nuclear plant, where the structure is mostly intact but you don't want people, is not the same as a mine or building collapse.”

“When we've worked with bomb squads, the spaces were cluttered, and dirty clothes got stuck in the treads,” said Murphy. “Texas A&M has resources for technology transfer for emergency management. It's not the same as military robots but without the camouflage paint.”

Getting robots to the right place

Among the technical challenges for emergency response systems are the tight spaces, limited visibility, and difficult terrain for even human-supervised operations, said Murphy.

“A building collapse is an extreme environment,” she said. “There's the immediate life-saving response phase, and then the slower recovery phase. After a hurricane, for example, the next stage would be throrough documentation for state and federal reimbursement.”

“These robots have to work in a one to two-foot diameter at best, traversing smoke, rubble, and fire,” Murphy explained. “When we look at navigational autonomy, going through confined spaces, SLAM [simultaneous localization and mapping] won't work. Teleoperation is harder when you're looking through a straw and can't turn around. There's no space for lasers, and you can only shine a light ahead in a narrow area. It's a hard problem—harder than running robots on Mars.”

“Going up or down in high tortosity or with slippery or wet surfaces, with gravel or sand—the geometry doesn't work,” she added. “What about when a robot loses odometry or contact with a surface?”

Murphy, who is a member of the non-profit Center for Robot-Assisted Search and Rescue (CRASAR), said the organization is on standby to assist in Florida.

“With shared autonomy, having a human in the loop is non-trivial,” said Murphy. “It's like riding a horse—you need to give it a direction and trust that it will be able to lift up each leg at speed and notice things on its own. That's what we want robots to be like. We need to be able to see and manipulate things in real time, not just during the recovery phase. We don't know how to model what we're looking for.”

“In the initial response phase, tasks almost always require remote presence and teleoperation,” she added. “People want to see in real time as they look for victims and structural damage. They don't want full autonomy in that instance, if ever, but they do want robots to be easier to use.”

Even artificial intelligence has limits in extreme situations, she added. “We don't know how to model what we're looking for,” Murphy said. “At every single disaster, I've seen something that doesn't meet expectations. Even in wilderness search and rescue, we see new cases arise. It's premature to say we'd just push a button, and the robot can come back. We're not there yet, and we may never be, given the nature of the tasks.”

Another problem is robotics developers jumping on the bandwagon and offering their services without being asked by local authorities.

“We'll have to wait from a statement from the public infomation officer from Miami-Dade to know know what's there,” said Murphy. “In many cases, they don't need more people consuming resources. It's insulting when a drone provider shows up uninvited and offers to do a survey of an area after a hurricane or wildfire. County people know what needs to be done, and outside drones can interfere with helicopters and other aircraft.”

One company was on the scene of the Champlain Towers collapse, presumably at the request of local officials. FLIR Systems Inc. sent two robots and an employee to the Miami area to help with disaster response.

The Chelmsford, Mass.-based company's robots also participated in efforts after the 9/11 bombings, the standoff with the Boston Marathon bombers in 2013, and responses to 2018 gas explosions, noted The Boston Globe. Teledyne Technologies Inc. acquired FLIR for about $8 billion in January.

Not only can robots help with emergency response, but they can also help prevent disasters, noted Murphy.

“There exciting untold stories,” she said. “Drones are being used quietly but the U.S. Department of Transportation and construction firms to check bridges and construction sites. I give two thumbs up to the Federal Highway Administration—this is a tremendous use for drones.”

“While drones are good, one company told me when I was a professor at the University of South Florida, 'We can see pretty well with binoculars, but we can't go underwater or inside a structure,'” Murphy said. “Florida has a lot of bridges that are more than 75 years old. What's inside structures is more interesting, and we can send pipe-crawler robots to go there.”

“There's a tremendous opportunity for robots in infrastructure,” she said. “I don't think of robots as replacing people but as getting into corners we've painted ourselves into. There are substructures that are impossible or unsafe for people to climb in. Robots are good for sewer pipes, cable trays, and pipe racks.”

“There's a lot of work being done in categorizing extreme environments. I've been talking a lot lately with the International Association of Emergency Managers about what's needed,” Murphy said. “A lot of inspection robots could have multiple uses, but companies don't need to oversell them. If they're upfront about capabilities, then responders can make good decisions.”