Attendees at A3's AMR and Logistics conference last week could see both the MassRobotics AMR Interoperability Standard and VDA 5050 in action. 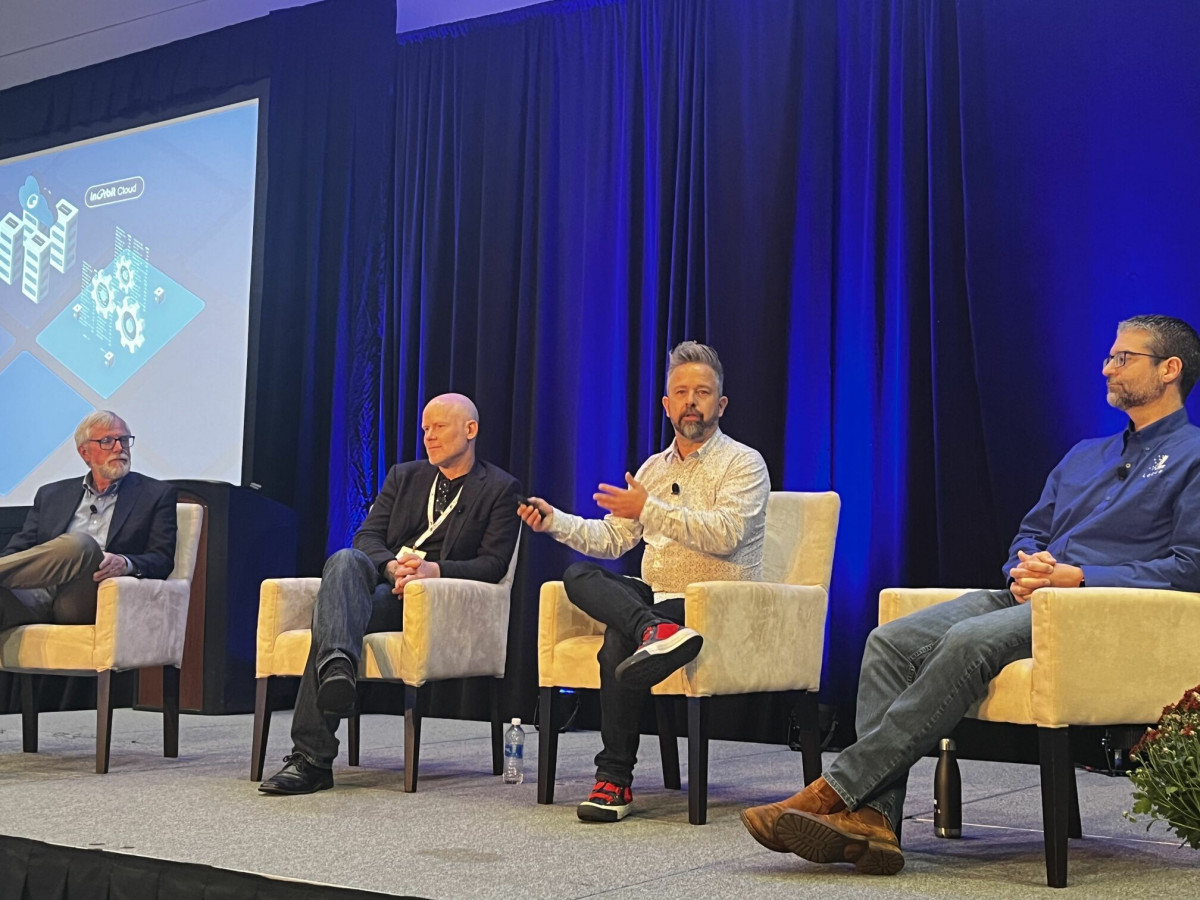 In 2019, Aaron Prather, then senior technology advisor at FedEx Express, challenged autonomous mobile robot, or AMR, vendors to work on interoperability at the Association for Advancing Automation’s first AMR Conference in Louisville, Ky.

He said that either suppliers cooperate to get their robots “to play well together,” or major users such as FedEx would look elsewhere.

Interoperability was once again a key topic of discussion at this year’s AMR and Logistics Week in Boston.

In a session on “Standardization Efforts for Mobile Robot Interoperability,” panelists outlined the progress they have made on the MassRobotics AMR Interoperability Standard, which was first published in May 2021.

The MassRobotics standard enables mobile robots to share their location and capabilities with one another, but it does not require vendors to share proprietary maps, explained Theobald during the panel.

“It allows a robot to share its operational status and information about location, speed, direction, etc.,” he said. “Pre-competitive collaboration is crucial to industry growth.”

As part of the AMR and Logistics Conference put on by the Association for Advancing Automation (A3) in 2021, Prather hosted a demonstration of the standard at FedEx's DART center in Memphis, Tenn. It involved a shared map that showed systems from Vecna Robotics, Waypoint Robotics, and WiBotic.

AMR and Logistics Week was produced by A3 and was co-located with The Vision Show. Visit Robotics 24/7’s special coverage page for more from the events.

Also, check out our Robotics Applications Conference, which is available on demand. Prather delivered the keynote address.

“If you’re working in any industry with robotics, interoperability will come up,” said Prather, who is now director of the Robotics & Autonomous Systems Program at ASTM International, at this year's event.

Compliance with the MassRobotics standard is voluntary, but it can help with robotics adoption, said Ryden. At the same time, the effort is open to interested parties and is working to complement existing standards, he said.

“The standard can help influence adoption, but it does not affect or duplicate safety standards,” Ryden added. “About 30 organizations are currently participating, with about a dozen actively involved.”

A senior engineer at Rockwell Automation asked about real-world deployments of v1.0 “in the wild.”

“We’ve seen some, but no large-scale deployments yet,” said Ryden. “InOrbit enables deployment. Some customers are starting to deploy robotic floor cleaners and forklifts together.”

How other standards efforts compare

While MassRobotics, A3, the ARM Institute, and others have collaborated, other interoperability efforts are also under way. Most noteworthy are the OpenRMF free modular software and reference platform and the German VDA 5050 standard.

“Open Robotics has been a great contributor to the industry,” acknowledged Theobald. “OpenRMF is more of an implementation than a standard. It was designed to work in a hospital in Singapore, but another company couldn’t just adopt it. We are in partnership discussions.”

“There has been extensive proof ... that Open-RMF is an open-source initiative that enables interoperability and is available for use by anyone that wants to use it,” said Open Robotics in an e-mailed response to this article. “Singapore was but the first deployment, but certainly not the only one.”

“VDA 5050 is primarily for the automotive market in Europe and is more focused on the details of interactions among equipment, machines, and PLCs [programmable logic controllers],” Theobald continued. “There’s no conflict with the MassRobotics standard.”

V2.0 of interoperability standard in the works

As the International Organization for Standardization (ISO) begins to adopt Version 1.0, MassRobotics and its partners are working on Version 2.0, which came out of an Advanced Robotics for Manufacturing (ARM) Institute project led by Siemens and FedEx, Theobald noted.

Version 2.0 establishes a mission communication application programming interface (API). It is intended to prevent too many robots from trying to use a single optimized route at the same time. Other features are left to fleet management software, said the panelists.

After years of talk about the need to manage heterogeneous fleets, why are standards efforts moving forward now?

“We believe a rising tide will lift all boats,” replied Walker, co-founder of Waypoint Robotics, now part of Locus Robotics.

“Locus has deployed more AMRs than almost anyone,” noted Ryden. “The more companies that are involved, that hopefully means they will buy in.”

“We’re not writing code and are open to feedback,” he said. “With an upper-level system that understands where robots are, you can plug in any robot, making integration easier.” 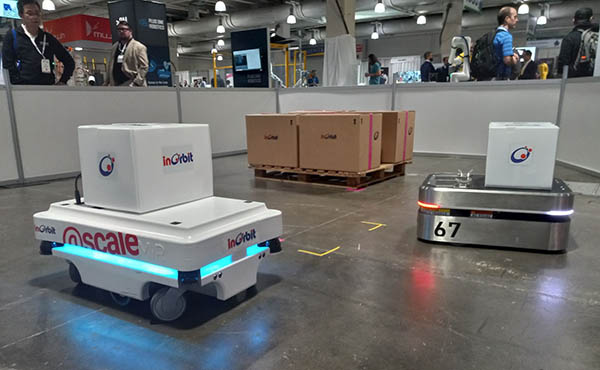 Charging is up next

Version 2.0 of the MassRobotics AMR Interoperability Standard will address charging and power, among other things.

“There’s a lack of common chargers for AMRs—both physical and software,” said Ryden. “Now’s the time to avoid conflict between standards.”

“Cars get gas in the same way – charging and batteries should be just as reliable,” Walker said. “If you have picking robots and AMRs, most facilities can’t have multiple chargers taking up space.”

One charger for a mix of AMRs would be desirable, noted Matthieu Ebert, account manager for North America at Wiferion, during a session on wireless charging.

The ARM Institute project used a WiBotic wireless interface, and the onboard charger and air gap interface allowed it to serve different form factors, said Ryden.

“That project started out as somebody trying to answer a customer request for a fleet manager for all things, but we don’t expect to compete,” said Walker in response to a question from investment firm Cowen about proprietary software versus standards efforts.

Attendees at this year's AMR and Logistics event got to see two of these interoperability standards in action. InOrbit worked with several robotics vendors and organizations to demonstrate the MassRobotics AMR Interoperability Standard and VDA 5050.

The demonstrations were broken into two sessions. The first one featured the MassRobotics standard and AMRs from Mobile Industrial Robots (MiR) and Locus Robotics.

On two TV screens near the demo area, InOrbit's software displayed a bird’s eye view map of the confined area. Markers on the map showed the location of each mobile robot.

While Locus Robotics’ AMR has its own fleet management capabilities, mapping software, and more, the interoperability standard enabled it to share key details with robots from other vendors, said Walker.

“For folks who have worked in the AMR world for a long time, this is really a big deal,” he said. “But if you haven’t, it might not look like much.”

Shared map easy to set up

Walker noted that the map on display was not made by the robot with simultaneous localization and mapping (SLAM). Instead, InOrbit created the map in Microsoft PowerPoint to illustrate where the robots were.

The internal map the MiR robot used was different than the one the LocusBot used, said Walker. “All of these are different independent systems, and you have this visualization software that InOrbit has made with this graphic design map,” he said.

Walker added that the status of each robot could also be seen in InOrbit’s software. He claimed that it was a pretty easy processs, taking the three companies only about 20 minutes to set up the whole demo.

“Once the interoperability standard is implemented as we have it on the [Locus mobile robot], then it’s just a matter of turning it on,” Walker added. “That’s the kind of thing that a couple of years ago would have taken months of development of proprietary code.”

The MassRobotics standard acts as a “common language” allowing vendors to share important details, he said.

Hernández said the biggest difference between the MassRobotics AMR Interoperability Standard and the VDA 5050 is that the latter can be used to issue specific commands. The MassRobotics standard is used for monitoring, he said.

“We’ve been trending on this idea of sharing what works and creating an informational hub where companies can share solutions to common problems,” said Theobald during the panel. “MassRobotics has been a facilitator of this conversation, helping businesses adopt what has already been proven. We encourage people to get involved.”

A scientist from the National Institute of Standards and Technology (NIST) asked about whether MassRobotics has plans for its standard to include factory equipment beyond AMRs.

“Think of it like GPS,” said Locus Robotics’ Walker. “Once people realize what it enables, they’ll find new applications.”

Editor's note: Open Robotics responded to the discussion about OpenRMF, and its comments have been added to this article.