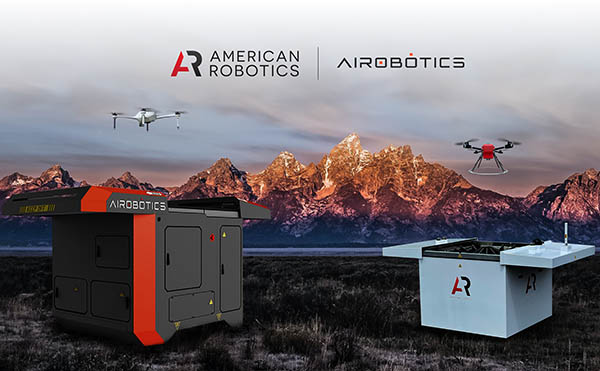 Ondas Holdings Inc. today announced that it has signed a term sheet to acquire Airobotics Ltd., adding it to its American Robotics Inc. unit for drone data collection. Ondas said it expects the merger or acquisition to complement American Robotics' systems, as well as expand the applications and markets it can serve.

“Airobotics' Optimus System is a sophisticated automated drone platform designed for high-value use cases in industrial, homeland security, and smart city services markets,” stated Eric Brock, chairman and CEO of Ondas. “The proposed acquisition of Airobotics will provide strategic technology, regulatory, and business capabilities to both American Robotics and Ondas Networks, opening new geographies and end markets and further strengthening our ability to deliver complete end-to-end solutions for customers on a global scale.”

“This opportunity demonstrates the leadership role Ondas Networks and American Robotics currently have in defining next-generation, mission-critical industrial data solutions and signals a new growth phase for the commercial drone sector,” he added.

Waltham, Mass.-based American Robotics develops and makes industrial drones provided through a robotics-as-a-service (RaaS) business model. The MassRobotics member said its Scout System is a “drone-in-a-box, turnkey” data service. The company claimed that it is the first drone to receive U.S. Federal Aviation Administration (FAA) approval for beyond visual line-of-sight (BVLOS) flights without a human operator on site.

The Optimus Airbase offers functionalities including robotic battery swapping and payload swapping. As a result, the system is able to provide near-continuous flight time and multi-option imaging capabilities. These features are useful for security and public safety, said Airobotics.

“We look forward to joining the Ondas family and the American Robotics team,” said Meir Kliner, co-founder and CEO of Airobotics. “Ondas Networks has demonstrated market leadership in the development of their wireless and automated industrial technology platforms, and American Robotics has pioneered fully automated drone operation through its precedent-setting FAA BVLOS approvals.”

“This combination will offer Airobotics the opportunity to expand globally, especially in the U.S., which we believe is the largest market for our Optimus System,” Kliner said. “The technologies and talented people at Ondas Networks and American Robotics will strengthen our systems and services, improving our ability to participate in the scaling of the commercial drone economy.”

Airobotics' Optimus System has been deployed in Israel and the United Arab Emirates (UAE), and the company has business-development activities in the U.S. and Singapore. Airobotics noted that it is in the final stages of obtaining a precedential Type Certificate from the FAA, which it said no drone company has yet done.

As part of this process, the FAA has published the safety criteria for the Optimus System which will allow Airobotics to certify its highly automated drone system, eventually permitting operation over cities and other populated areas.

Ondas Holdings said American Robotics' Scout System and Airobotics' Optimus System are leading autonomous drone technologies in their respective markets. In addition, the business combination will bring together leading engineering and aviation talent, as well as regulatory experience, it said.

A merger would enable the companies to share intellectual property (IP) around payloads, detect-and-avoid (DAA) technology, reliability and safety systems, and data analytics, asserted Ondas. This would lead to optimized system elements in current and future platforms, the company said.

In addition, the combined company will be able to market DIB globally, according to Ondas. American Robotics has estimated that more than 10 million asset sites around the world need its technology for the next era of industrial digital transformation.

The proposed acquisition or merger will provide U.S.-based marketing and field services for the Optimus System and increase opportunities to bring American Robotics' Scout System to international markets, said Ondas.

Regulatory approval has been a challenge for commercial drone growth, but American Robotics and Airobotics have participated in the recent FAA-sponsored Aviation Rulemaking Committee on the BVLOS operation of unmanned aircraft, known as BVLOS ARC. Ondas said the integration of American Robotics's safety systems with Optimus could lead to extended FAA approvals for BVLOS flights. 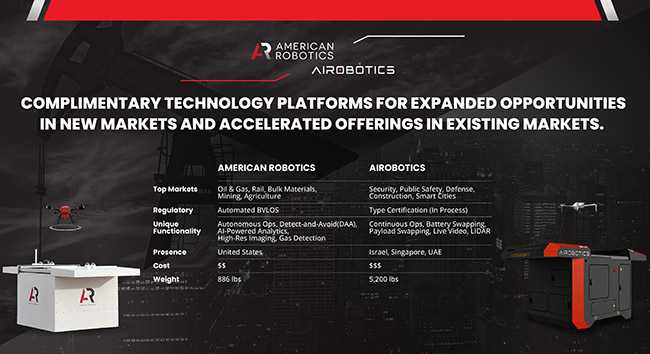 Ondas Holdings said it expects the combined company to provide cost-related efficiencies. They include savings from integrated engineering and product development programs; shared sales and marketing resources; and the elimination of certain duplicative costs related to legal, board, and other public company costs.

Ondas said each issued and outstanding share of Airobotics would be converted into, and exchanged for, 0.16806 shares of Ondas common stock, or about $18 million. The proposed acquisition or merger is subject to the satisfaction of standard shareholder approvals and regulatory requirements.

The parties have agreed to an exclusivity period until the earlier of Aug. 4, 2022, or the execution of a definitive agreement. The parties intend to complete the proposed acquisition or merger in the second half of 2022.

B. Riley Securities Inc. is serving as exclusive financial advisor to Ondas in connection with the proposed acquisition or merger of Airobotics. Ondas has filed documents with the U.S. Securities and Exchange Commission (SEC) and the Tel-Aviv Stock Exchange (TASE).